Hydroxymethylglutarate (HMG) is the precursor to Coenzyme Q10 (CoQ10) production, and when it is elevated it may indicate that the body is trying to increase its production of CoQ10. 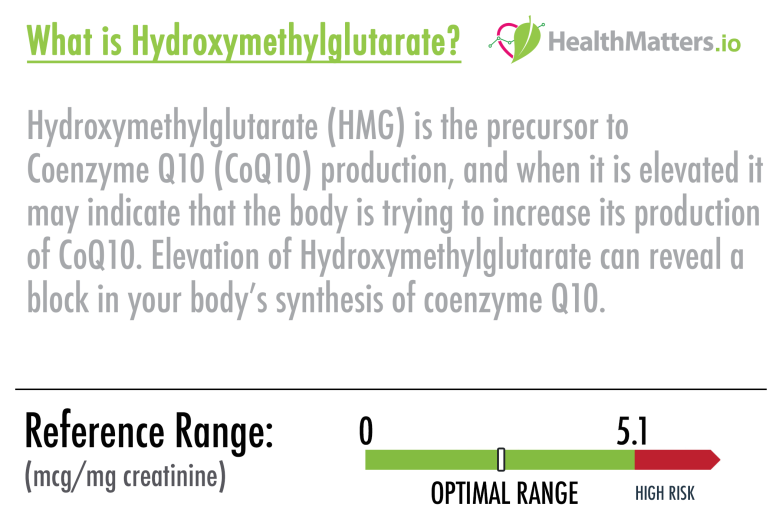 Elevation of Hydroxymethylglutarate can reveal a block in your body’s synthesis of coenzyme Q10.

Other functional markers such as Lactate, Succinate, Fumarate, and Malate, indicate whether your body is able to produce energy efficiently by utilizing coenzyme Q10.

Cholesterol-lowering statin drugs block this process, causing HMG to become elevated and inhibiting the production of CoQ10. While there can be other causes for this metabolic block, high levels of HMG generally indicate need for CoQ10 supplementation.

Hydroxymethylglutarate is a metabolic precursor of cholesterol used by your cells to make CoQ10, a nutrient that enables the body to use oxygen to generate large amounts of energy.

Since your body can make coenzyme Q10, it is not called a vitamin. If you are making enough to meet the demands of your tissues, you do not need to take any extra. However, many people do not make enough coenzyme Q10.

Other functional markers such as Lactate, Succinate, Fumarate, and Malate, indicate whether your body is able to produce energy efficiently by utilizing coenzyme Q10.