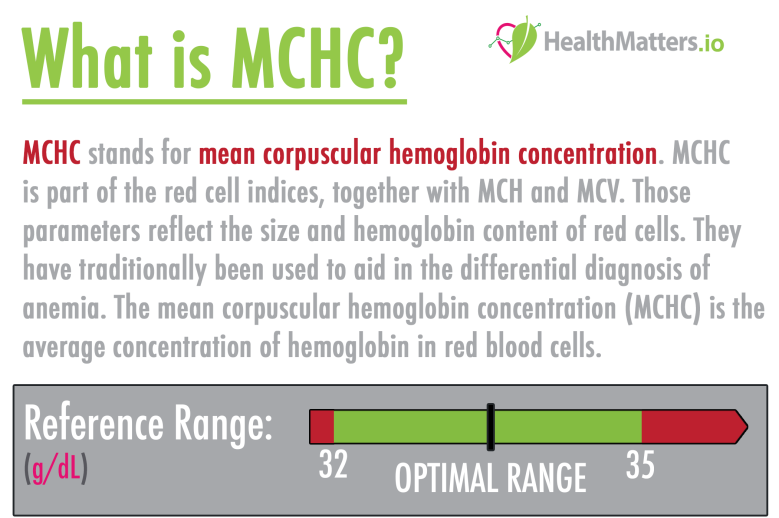 MCHC is part of the red cell indices, together with MCH and MCV. Those parameters reflect the size and hemoglobin content of red cells.

They have traditionally been used to aid in the differential diagnosis of anemia.

What are red blood cells?

Red blood cells play an important role in your health by carrying fresh oxygen throughout the body.

MCHC is not measured directly but is calculated from the hemoglobin (Hb) and hematocrit (Hct) concentrations:

Hemoglobin is the protein molecule that allows red blood cells to carry oxygen to tissues within your body.

Difference between MCHC and MCH:

Note on errors in hemoglobin concentration and red cell indices:

Errors can occur in automated measurements of the Hb and red cell indices. Such erroneous results are usually suspected from a markedly elevated MCV, a markedly abnormal MCHC or a discrepancy between MCHC and MCH. Such errors can be caused by poorly mixed specimen, marked elevations in lipid levels, or raised WBCs among other things.

Your MCHC can fall into low, normal, and high ranges even if your red blood cell count is normal.

The MCHC basically tells you whether your red blood cells have more or less hemoglobin than what would be expected.

More about MCHC and anemia:

An example of a type of anemia that exhibits normochromic is pernicious anemia, which is caused by a lack of vitamin B12 in the body. An MCHC result below 32 means that the red blood cells contain less than the normal concentration of hemoglobin or are hypochromic, a condition that occurs with iron-deficiency anemia and thalassemia. Because there is a physical limit to the amount of hemoglobin that can fit into an RBC, an MCHC level above 35 is rare.

When the MCHC is high, the red cells are referred to as being hyperchromic.

Possible causes of a high MCHC (which is uncommon) include:

– Autoimmune hemolytic anemia, a condition in which the body’s immune system attacks its own red blood cells.

– A type of hereditary hemolytic anemia called spherocytosis has been associated with high MCHC.

– Anemia caused by a deficiency of vitamin B12 or folic acid is also known to cause high MCHC values.

Other causes of high MCHC include:

– Certain medications, such as anticonvulsant drugs

MCHC may also be higher in pregnant women, but values usually return to normal after giving birth.

When the MCHC is low, the cells are referred to as being hypochromic.

Low values can also be associated with:

– Acute or chronic bleeding due to menstruation, physical trauma, surgery, or ulcers, for example.

– Deficiency in copper or vitamin B6 (pyridoxine)

– Removal of the spleen (splenectomy)

A slightly low MCHC does not always produce noticeable symptoms and may not always be a sign of illness. Some people are unaware that they have low hemoglobin until they have a routine blood screening.

Hemoglobin is responsible for the red color in blood and for circulating oxygen around the body. The lack of oxygen caused by a low hemoglobin concentration may cause fatigue and other anemia symptoms.

Low MCHC is not always a cause for concern. Your doctor will evaluate all of your CBC test results in order to make a clear determination about what is causing your abnormal value.

Women with low MCHC have a greater risk of developing symptoms of depression, and it might be a better predictor than low hemoglobin.

Whether hyperchromic or hypochromic, treatment is primarily focused on treating the underlying condition. Iron supplementation and the increased dietary of intake of iron can help treat iron deficiency anemia, but an iron supplement is not recommended for people who are not iron deficient (excess iron can be stored in the liver and heart). Blood transfusions or bone stem cell transplants may be used in more severe cases.