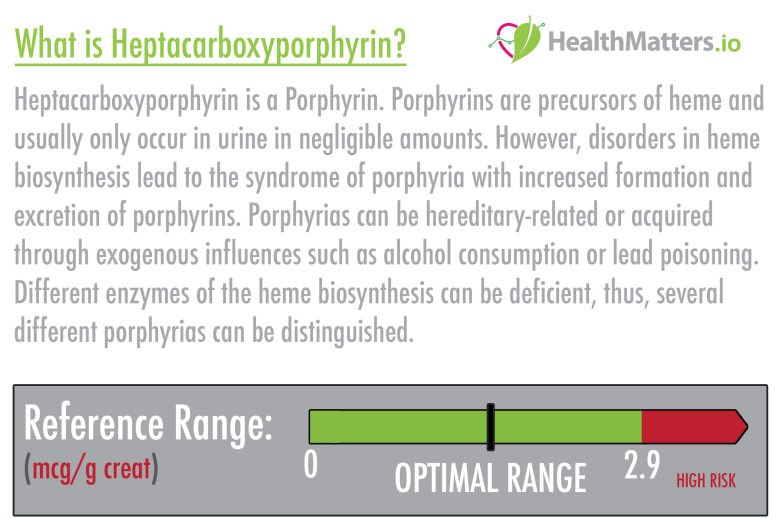 Porphyrins are precursors of heme and usually only occur in urine in negligible amounts.

However, disorders in heme biosynthesis lead to the syndrome of porphyria with increased formation and excretion of porphyrins. Porphyrias can be hereditary-related or acquired through exogenous influences such as alcohol consumption or lead poisoning. Different enzymes of the heme biosynthesis can be deficient, thus, several different porphyrias can be distinguished. Since these share some common symptoms, chromatographic measurement of the porphyrins is the only way to enable an exact diagnosis.

Porphyrias, which can be inherited or acquired, are often diagnosed with the aid of information regarding the distribution profile of individual porphyrin intermediates in urine. The term “porphyria” is derived from the Greek word porphyria, meaning “purple pigment”.

Porphyrins are particularly well suited as biomarkers for two reasons. First, the pathway is highly active, so any disturbance tends to cause rapid and relatively large accumulations of intermediates. Second, the enzymes of the porphyrin-producing pathway are widely distributed in human tissues and some of them are highly sensitive to the presence of various toxins.

Alterations of porphyrin synthesis that are not due to hereditary or toxic disturbances of porphyrin metabolism are adaptive responses. Such responses caused by alcohol or other drugs may not lead to clinical consequences. However, these disturbances often initiate biochemical and clinical manifestation of genetic porphyrias that previously may have been latent. Once initiated, the symptoms may be long-lasting, especially if the offending toxicant is not identified and removed or avoided. Numerous toxic porphyrias are precipitated by environmental mediators.

Multiple environmental and nutritional factors can cause additive effects. For example, hexachlorobenzene-induced porphyria is accentuated by estrogens and attenuated by vitamin C. The estrogen effect increases the susceptibility of women to porphyrias. Aluminum inhibits some heme synthetic enzymes and has been implicated in causing porphyria in chronic hemodialysis patients, whom are often aluminum overloaded.

Lead intoxication causes signs and symptoms similar to acute intermittent porphyria including abdominal pain, constipation and vomiting. However, anemia which is often found with lead intoxication may be absent in lower lead exposures that generate porphyria, indicating that the overall flux through the porphyrin pathway is not strongly reduced even though significant amounts of intermediates are spilled, due to the toxicant effect.